This is one of the greatest games ever created for the MAC. It came out in the early nineties, and it was one of those games that just ate up time. It is a resource management/conquering worlds game that was reduced to its barest essentials, but managed to keep certain elements intact to keep it interesting.

It is such an efficiently written game that in the early ’00’s, the authors, Delta Tao (link) published a Palm OS version, which I used to play on my Tungsten T during my first years out of 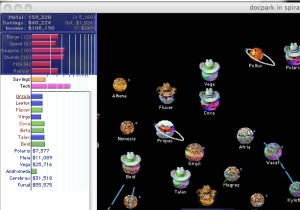 training -usually during the dead time waiting for cases to go in the middle of the night.

Resource management games are very old in the scifi-nerd culture. The problem is that when presented as a board game, an inordinate amount of time is taken up book-keeping. How many Quatloo’s can you keep track of while rolling the dice and moving imaginary fleets across the board?

The game play is simple as clicking the keyboard. You start with a homeworld, and your mission is to explore and colonize surrounding worlds, mining the metal, and terraforming the planets so that your population grows on it and generates revenue. Terraforming, mining, designing and building ships takes money. Borrowing and saving also involves interest.

The game’s charms involve humorous graphics for the spaceships and funny sound effects for launching and exploring with the spaceships. The game quickly becomes interesting as you confront and battle against other players (both computer or human).

It is turn based and requires a minimum of a learning curve. The shame of it is that Delta Tao has stopped developing it, right at the moment where farting applications are taking the world by storm. I can’t imagine it would take too much of an investment of time to convert it to an iPhone app.

We can start by emailing Delta Tao to work on an iPhone version (help@deltatao.com).

It works -Joe Williams -who the program icon is modeled after, replied “We’re talking about an iPhone version, and I’d say it’s highly likely, perhaps by the end of 2009.”

3 thoughts on “Spaceward Ho! -the greatest game not yet on iPhone”