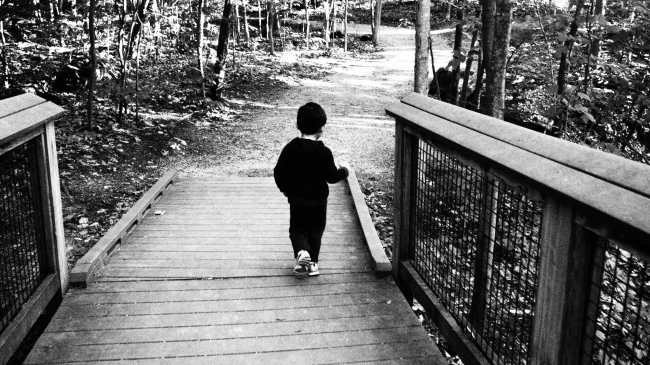 …It strikes me odd how fast 25 years flew by. I have decided it is a function of age and perception of time. Looking through the eyes of my four year old, I see that a year comprises 25% of his life and proportionally, that is almost 12 years in my life. A lot happens in a year of a 4 year old, and a lot happens in 12 years to a 46 year old, but a year slips by to me like a month does to my little one. So each year, being proportionally a smaller part of my experience, goes by faster and faster, an unwanted acceleration.

We’ve lost some dear classmates…. They still live in my memories, but their absence on my contacts and my Facebook gives me a daily measure of the value of my time here and now. Their remarkably full but brief lives make me believe that living is not just not being dead. Every reunion after the 10th is as much about mortality as it is about taking measure of each other’s progress. It fouls the air with its musky perfume.

I concluded after the last reunion that people don’t really change, but the guys really can gain weight and lose their hair. Everyone should take a look at their weight and work very hard to get back to their Freshman year weight. You will be easier to look at, and you will be healthier and less of a burden to the pedicab driver next time you are in Phuket. Can’t help with the hair.

I think that television programming caters to this middle age navel gazing and explains nicely the current popularity of zombies and meth chemistry. Do you struggle to avoid becoming a zombie or have you have you unwittingly joined the undead? Do you make choices that help others or just yourself? You knew that head on the turtle was rigged to blow but so often you will grab it just because, no? Spoiler Alert –Walter dies. Or was the whole last episode was a fever dream as he froze to death inside the jacked Volvo in New Hampshire. Which isn’t that bad of a way to go.

Speaking of ways to go, would you help your fellow classmate if you ran into them in the post-apocalypse? As you stare at them unblinkingly through the reticule of your rifle, do you ask, “what House were you in?” as your posse dispossesses them of water bottles, tents, and a few cans of Spam. Nice shoes. Do you invite them in, or give them back their water bottles and shoes and send them along, or do think you will need more salt. I would like to think that an invitation would be the sensible thing because we humans are social animals and survive best in bands of trust and kinship, which I assume is a given among you, my brothers and sisters. Unless you lived in the Quad, then at best you might make a passable sopressata.

I recently visited Calabria, speaking of sopressata. Looking out on the sea, with the Aeolian Isles in the horizon, I thought of Odysseus and how he really took his time getting back home. I thought of Saracen Corsairs picking out good spots to land where they could avoid boiling oil showers, and thought maybe they tried the sopressata despite the injunctions if they were curious enough, curiosity being a kind of hunger. I can’t say I understand the meaning of life after that visit, but I can assure you I came a few steps closer staring out onto the sea under moon and stars with the hot Saharan wind pushing you away from the edge of the ruined battlements.

My meaning of life is written in the sweetness of a baby’s breath, the soft kiss of your wife, the sturdy pride in your children’s accomplishments. It is in seeking friendships that aren’t metered in banal Likes but in thoughtful actions. It is to serve the world at large. It also is to buy the latest iPad because you can. And sometimes you take the long way home because you want to, because the car drives nicely. And you try the sopressata, chased with a Zantac…

I have had my iPhone 5 reboot itself spontaneously after the iOS7 upgrade. Also, it will shut down declaring there is no battery left when there was 75% left on the meter. It is behaving no better than my Android 4.3 Nexus 7 Tablet which will crash on occasion as well. Steve would never have allowed this. We are now seeing an “industrial” Apple. People of a certain age can remember a time when Pepperidge Farms was their own company and made amazing chocolate chip cookies. Now these cookies are just another petroleum/corn based byproduct, a faint echo of their original goodness. Going big, which was a dream of every Apple fanatic back in the days right before Jobs returned, has now come back in the form of this kind of behavior -blue screens and defunct Maps. The revolution is over. 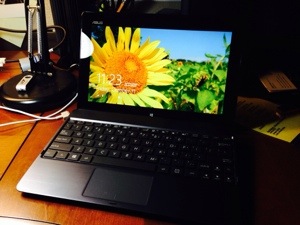 I wrote during the summer that Microsoft didn’t have a tablet that met the criteria of high definition screen, all day battery life, and functional design. I was writing about their Surface line of tablets that I tried out in a forlorn Microsoft Store. I totally missed ASUS’ VIVO Tab which is roughly the size of a letterbox shaped iPad. By itself it has about 8-9 hrs of battery life but the secret sauce is its keyboard base which was an optional accessory. Unlike keyboard options for iPad, you click this into the charging port and you now have a mini laptop with a touchscreen. The connection is strong and trumps most keyboards for iPad and Surface in that the clamshell configuration lets you put it on your lap. Even better, there is a battery in the base giving the keyboard ballast and the whole device an extra 6 hours of usage. When used with the keyboard base, the VIVO Tab is suppose to get up to 16 hours of battery life which is great for a light laptop/tablet hybrid that is airplane tray table friendly.

Some people won’t like the small keys which are Brobdingnagian compared to my Vaio P Series laptop. The screen is bright and nearly Retina -about the same as the current iPad Mini. I really like the price I paid for it -285 for both the tablet at its battery-keyboard base. This was through Woot and almost half off last year’s price.

The thing runs Office and will link to my hospital system via Citrix. The only snag is there really are no apps for Windows RT which drives this Tegra processor. Yes there is Kindle, Evernote, Dropbox, Netflix, and Hulu and a web browser. The XBox game thing appeals less to me than the radio which is okay but I’m invested in iTunes so it’s irrelevant. There are a ton of programming apps and I think that Windows RT will be a curiosity for nerds like Segways, AMC Pacers, and OG Dr. Who. Even so, having a blank Word screen feels so full of possibilities, I can now spend 16 cordless hours at the Starbucks writing the great American novel. If I had the time.

Addendum: The battery life is for real having used intensively at work yesterday between cases and watching Netflix and Hulu last night. There is enough juice today 47% to go another day of light work. The only hassle is that like all regular Windows devices including Windows 7, Wifi is dicey. I am now at my sons’ Korean class at the Korean Cultural Center and the VIVO Tab refuses to search and find the new network. I rebooted but it started a looooong Windows update which occurs weekly. Now I don’t have a computer to use and am quickly reminded why I generally hate Microsoft products.

The other comment is that the keyboard doesn’t always turn off the screens keyboard which should be a norm. Apple would not have let this out the door in this condition (hence the uproar over its pathetic Maps).

Addendum: The intermittent problems that I have had with the keyboard are actually a problem with the touchpad. Like any non-Apple touchpad, the touchpad on the Vivo Tab, is overly sensitive and will interpret a light touch or hover as a tap to redirect the cursor where the mouse is pointing. This is a problem I have had in most Windows laptops and can be somewhat ameliorated by decreasing the sensitivity of the touchpad, but on Windows RT -access to this is impenetrably difficult. There are two ways to get to the controls of the computer -one via a right swipe which gives you a very limited number of functions to tweak. The other is to get to the desktop mode -the one missing the Start button. From there, getting to the control panels is basically impossible and I managed only by bringing up the Windows Defender control panel during an obligatory scan, noticing the folders setting on top and digging to find the Synaptics driver -but no dice. There is no way to set the touchpad as far as I can tell.

The solution? A USB mouse from an old PC which now takes up the only USB port available.

Addendum: October 15, 2013 -Add to the issue that when the tablet goes to sleep, it won’t wake up. I have updated all drivers and returned the sleep settings to factory original conditions. This is obviously a problem with this tablet because I see it on the internet, but every Windows device going back to Vaio’s I owned in the mid 2000’s had a problem with sleep. It’s probably not a Microsoft problem, but a manufacturer problem, but again, my MacBook Pro sleeps and wakes without problem. With a tablet, not turning on when you want it on is criminal.