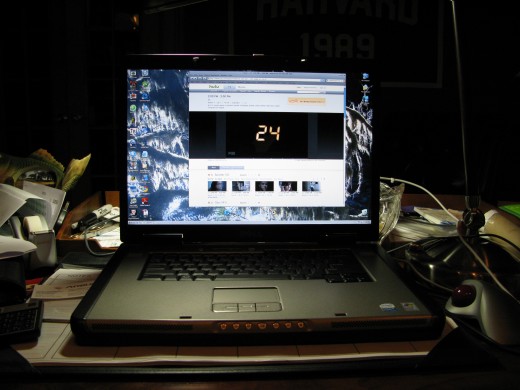 This is a 17 inch Dell behemoth that weights about ten pounds and is useful for checking email. It also offers connection to Youtube, Hulu, iTunes, and Netflix, and offers more entertainment than my 42 inch DLP TV in the basement with a DirecTV HD account. On screen is the 2-3pm episode from the current season of 24.

Broadcast television was supplanted by cable. Cable television and its prettier sister, satellite television, are headed for the attic of dead technology by video on demand over the internet. This was presaged by TIVO and the ability to time-shift programs. But Youtube and Hulu, iTunes, and Netflix, and shows available on the networks sites all presage a time when you don’t have to watch what is available, but rather you choose exactly when and where to watch what you want.

Currently, with the offerings of Youtube, Hulu, iTunes, and Netflix, I can 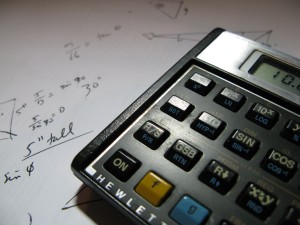 watch pretty much whatever I want whenever I want. If a program isn’t available in fact, I usually couldn’t care less. This is an important threshold -if something of critical value weren’t available -I would feel compelled to pay extra for it. This one quality that is keeping the satellite subscription alive is high definition programming. It is just valuable enough to keep it around for the sake of viewing on a large screen, but the fact of the matter is that a 50 inch widescreen TV at 10 feet is the same as watching a 10 inch screen at 2 feet (yes, I did the math -proof above). That means, streaming hi-definition images to a 10 inch netbook gives you the same images relative size as watching a 50 inch screen from a couch.

We are about to cancel our DirecTV connection in favor of our home stable of laptops and iPod touches. The video time that we have as a family is spent in bed with a laptop watching one of 12,000 movies available over the ‘net on Netflix with a $10/month account, or downloaded to an iPod for 1.99/episode, or on DVD, again on a laptop. The large screen is okay for viewing sports, but time is short, and the networks are available over the airwaves in HD. Fact is, I prefer watching sports with other people at a sports bar.

The purchase I am considering next is a small computer capable of streaming Netflix and running iTunes, with double duty as a email checking station. The cable company gets to stay in the house only for the internet -until fiberoptic broadband becomes available then goodbye cable. In fact, I am waiting to see what Apple does with AppleTV versus the Mac Mini.

What I discovered more recently is this: it is more fun to make TV than it is to watch it. Check out my friend Victor’s channel on Youtube (link).

The TV is dead. It is now just a monitor.