I have agonized over this for a while, particularly after being on call and dropping 3 consecutive calls that left me awake and irritated. Luckily, they weren’t critical, but the iPhone, which I love, works very poorly in my house with AT&T. There is a nearby cell tower, and I should get 5 bars of coverage but we are behind a hill and as you enter its shadow, the bars go to zero, and in my house, 2-3 bars is a good day. I know never to take calls from the kitchen but rather run outdoors if the call is critical.

Therefore, I am quitting AT&T and moving to Verizon. I used to be a 10 year Sprint veteran, but their coverage is equally poor. AT&T in its greed sets their phones for almost no roaming and so won’t switch towers even though there are GSM towers within site (T-mobile I guess). So to Verizon I go with their miserable top down approach to smart phones.

They apparently were offered the iPhone but did not want to relinquish controll over the apps.

I know I had sworn off WinMo, but fact is that HTC has hacked up WinMo 6.1 to work almost like the iPhone with its “flo”-ing user interface. What I like is the fact that you can tether the phone or even better, download a software that will let you make the phone a WiFi hotspot which is nice for my laptop. The irony will be that my iPhone will still be in my pocket for use to call out via Skype over Wifi -this works very well.

I’ll review the HTC Touch Pro2 as soon as I get my hands on it. It’s screen is larger and has higher pixel density than iPhone and it has a real keyboard. It has Bluetooth 2.1 which should let me pair all kinds of gadgets to it including a stereo headset and my earpieces (Plantronic Pro 950 which I consider incredible for cancelling outside wind noise).

Verizon will have to change a lot of things to get iPhone and may not have it in its DNA to undergo this change. AT&T deserves a bag of poop delivered on its doorstep on fire for its negligence of establishing bulletproof coverage. These phones are mission critical and need to be on and reliable.

AT&T had its chance -I asked the customer service rep for microcell -to set up a local in-house micro cell tower. But this would only be an admission of defeat for AT&T and it has not release what would be an enabling technology.

So I ring AT&T’s doorbell, light that paper bag full of steaming poo, and run down the street! 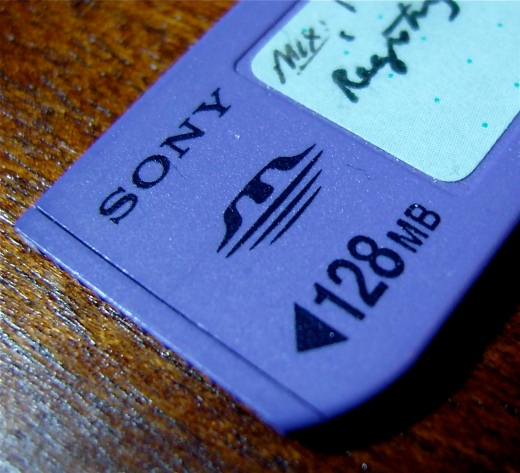 Sony’s ability to turn gold into lead has a long track record. It started with Betamax but continued with MiniDisk, Memory Stick, UMD, and now Blu-Ray. You’d think they won with Blu-Ray, beating back HD-DVD, but it was a pyrrhic victory of one army of muskets over another army of muskets -on the horizon is a bunch of guys with cruise missiles, machine guns, and Predator drones. If you go to the video rental store (they still have these, but not for long) you will see about two racks for Blu-Ray. Who wants to spend for that when you can get just about as good for a lot less. That’s what its all about -remember Pioneer’s LaserDisk? Videophiles cherish the quality and durability of this format that predated DVD’s, but it was a millionaire’s plaything. Not so much with Blu-Ray which is hampered by the fact that to get the movie, you have to go and buy the movie or order it and wait for it to be delivered. With Netflix, Hulu, and iTunes along with a host of others, satisfaction is immediate. I downloaded Star Trek in HD and watched it with great satisfaction in 720p on my HiDef computer monitor. 23inch monitor for two feet away is the front row.

Sony has too many competing interests and kills itself by handicapping its products. Or it fetishizes design over function and delivers actual 4,000 dollar laptops that can’t make a movie with their own digicamcorders (my personal experience). People sneer that MacBook’s don’t have BluRay, but do you want to spend the extra money for that blue plastic cover? Especially when you already own Star Wars in VHS and DVD?

People are getting the notion that content has value -not the plastic case or the shiny disk. This is where Sony fails in clinging to a dying business model rather than adapting. It is the giant three toed sloth struggling in a tar pit.

I finally get my own didgeridoo. It is an ancient instrument that uses a simple hollow tube to create that classic droning sound full of harmonics.

New excerpt as read by the author. Check it out!

These are three new Field Runner towers suggested by G. He explains that the Shredder tower spins and slices whatever is nearby. The Spike Shooter shoots deadly spikes. The Acid Shooter squirts burning acid from the spout.

The figure above shows level I towers and upgrades. Please give us new towers and new maps. Thank you!

Video update of my NaNoWriMo project, Abandonner: A Memoir of Regret. It is taking all of my powers of literacy and observation of women in their natural environment to write this exploration of the feminine psyche from the perspective of men who abandon them. I am writing in the Chick Lit category.

The last weekend of golf is like the final sips of a good bottle of wine. Some people stop after the first glass, but I tend to take golf to the bitter dregs if given the opportunity. I played last weekend during a splash of 60 degree weather. I walked 3 holes -the first three of Wakonda which are the toughest three starting holes in Iowa. I birdied the first hole by holing a chip, tripled the second after getting in the bunker off the tee shot and flubbing the sand shot due to wet sand, and bogeying the third after getting on in regulation and three putting.

This was 2009 in a precise nutshell. I should give up golf and only write about it.