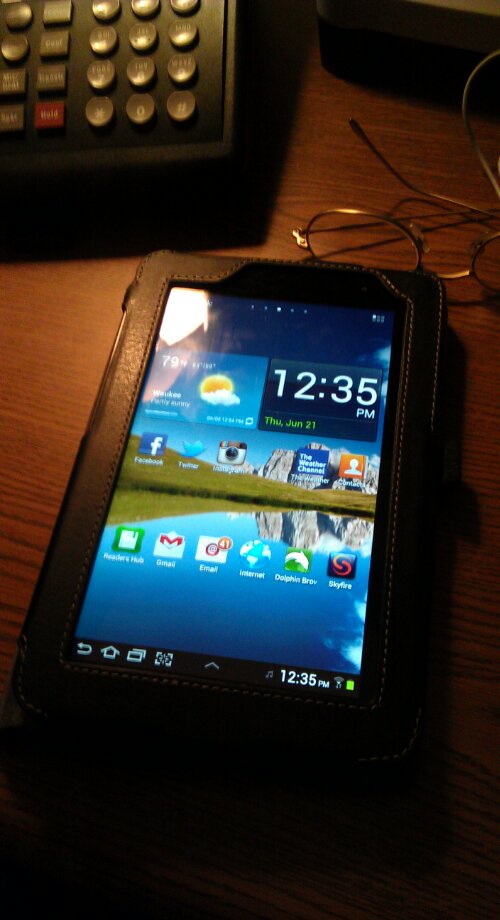 The annoyingly named Samsung Galaxy Tablet 2 7.0 came out last month and I couldn’t hold off picking it up because my other 7 inch Android tablet has been appropriated by my 3 year old for video watching. Turns out, while traveling, the 7inch tablet is easier to hold than an iPad. I have become a fan of the 7 inch form factor, and because most of my work is done in email, Evernote, and Dropbox, across multiple platforms, it really doesn’t matter what gadget I’m on, as long as these cloud services and apps are available.

I was first struck by this device as being more business oriented than previous tablets, having charcoal grays that would look good in a boardroom. The front is Gorilla glass, the back is a high quality plastic that feels good in the hands. There are front and back cameras and Instagram works fine from either sides. It is thin enough. The 7 inch tablets work well for me in the hospital because it fits in my pocket. All the medical apps work, and in a pinch, Citrix is usable for accessing the hospital and office data. I can also read my Kindle books and watch Netflix and Hulu, listen to Pandora and Spotify, and via Google Play can cloud base my iTunes for my Android devices, or as I have done, park the non-DRM files on a 64 gigabyte microSD card with room left for over 25 feature length films.

It runs well, has between 6-8 hrs of battery life. It is much more user friendly that it used to be, but really, if you can’t set up your own email account, you shouldn’t be given a computer. Amazon sells a faux leather book cover which works and keeps things corporate.

It will run Amazon media via Flash, but who has time to watch Downtown Abbey when you have four seasons of Mad Men to catch up on? Flash kills your battery life (we know, we know), but there are times that it is convenient although every year it is less so as Apple and Microsoft have abandoned Flash.

Ice Cream Sandwich (ICS) is much more touch friendly than Honeycomb which killed the 10inch Android Tablet in the crib. The Tablet 2 designation is correct in that Samsung is positioning itself as an Apple alternative in the post PC world. I like ICS because you can customize. The problems Android had when I had my Droid 2 from Motorola/Verizon are note apparent -contacts come up fast on emails, and Facebook and Twitter are laced into the OS. It doesn’t crash. Individual apps may but the whole OS no longer dies. I see no need for a task killer so far.

Why did Steve Jobs hate the 7 inch form factor? It didn’t jibe with his four square grids on his keynote presentation. As he said, you’d have to file your fingers down to nubbins to reach the right size – this is not true. I think it was a mistake on his part. The fact is that industrial gadgetry is market begging to be filled by the void being left by BlackBerry. Doctors want a tablet, but one that doesn’t need a murse or a satchel to carry.

This tablet at 249.99 at Best Buy is more expensive than the Fire, but I think it does more. Even if you are wed to iOS, the fact that most of the big apps like Instagram and Angry Birds are available means that it doesn’t matter which one you have. I am preferring subscription services like Netflix and Spotify because of their ubiquity on multiple devices. Subscriptions make more sense because you don’t need to take up precious storage space for media when you can have it in the cloud -the tradeoff being the need for a broadband connection.

Other neat stuff -it features a universal remote and IR blaster, letting you turn it into a very cool feature rich remote. The app also tells what’s on TV -it would be wonderfully convenient if it just displayed the TV as well, no?

It’s a good time to be into tech. You have options. When Apple does come it with a 7inch iPad, you’ll have even more. 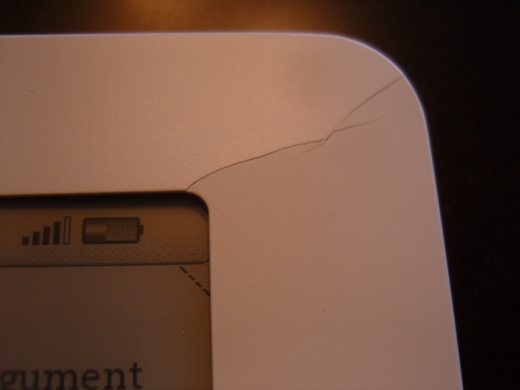 The return customer is earned with every interaction. Amazon has earned my business every year with amazing responsiveness and promptness. I have shifted most of my shopping to Amazon purely for the convenience of not having to drive around town looking for things. The Kindle 2, shown above, was purchased with an extended warranty. Normally, wear an tear is not covered, but I felt that it should have weathered a fall from the bed to a carpeted floor. This crack was not only unpleasant to look at, but created instability in the cover and would eventually fall apart in jagged, carotid artery scything shards.

The kind fellow at Amazon has a replacement in the mail! I am now fully Amazoned.

This contrasts with the terribly shabby way I was treated at Dell a few months ago when they lost my on-line order but took my money. It took three days of calling to eventually get them to cough up my netbook.  Their awful customer service and delays in delivery brought them to the attention of the NY Times. 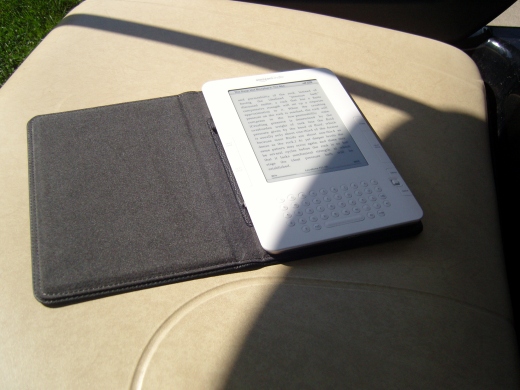 Screen needs light to be viewed, but really approximates ink on paper

There have been many reviews of the Kindle 2, and I won’t repeat these. I had been on the brink of getting one, but was enjoying my Kindle iPhone application immensely. What pushed me into purchasing one was the recent price drop on the Kindle 2 combined with my increasing frustration with my inability to purchase Kindle books from Amazon on my iPhone without going into the full web page on Safari (and not via their wonderful Kindle app nor their very workable Amazon Store app).

I ordered mine with the leather cover which gives it the hand feel of a nice 100 page leather bound book. 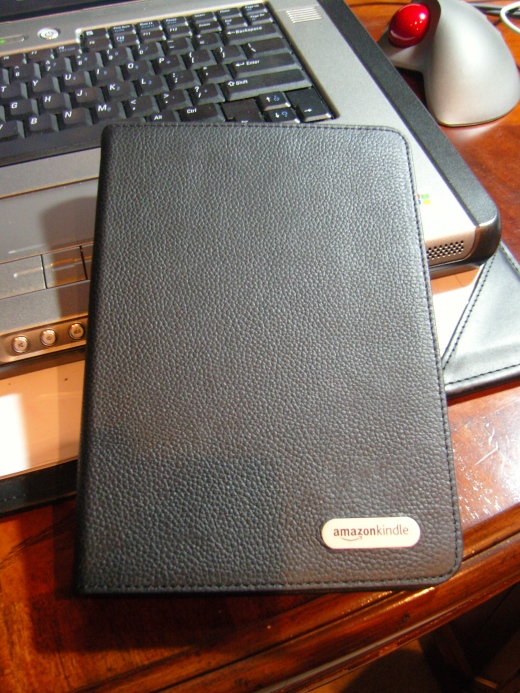 The screen is incredibly readable and trumps the reading experience on iPhone. The only advantage iPhone has is that you can read your books in bed with the light out. Your progress on the book is updated for both iPhone and Kindle.

Reading on Kindle is a joy -the device, though not pretty in the way that Sony’s E-Reader is, is solid and very thin and basically unobtrusive. It’s always on Sprint data connection included in the price of the Kindle means you can buy books anywhere which I did from the golf course yesterday while waiting for people to process their golf (Wakonda had one of its interminable outings). If you are especially cruel, you can go to Barnes and Nobles, paw at a book that you might like, look it up and see if it’s available (currently 300k titles), and buy it electronically and put the real book back on the shelf.

Not carrying a hardback book is a nice convenience. Not carrying many, many books is miraculous. Particularly textbooks which when searching vascular comes back with about 74 text books, discounted for electronic format. The problem with textbooks is that you can’t carry one around for reference or just plain reading for pleasure (I know, I’m a huge geek but that is why I got a Kindle).

Is it something that everyone should get -yes if you buy a lot of books and believe that scholarship is a lifelong avocation. You can get just as much out of a library card, but you’ll have to carry physical books. You’ll likely pooh-pooh it if you’re in that “I love to fondle books” crowd, but more likely than not, you have never actually seen a Kindle.

I think this is the killer app that will make Amazon the iTunes store for books. The question is, will Amazon open up the Kindle to kindlish apps, including an MP3 player app for their very nice music department (cheaper than iTunes). 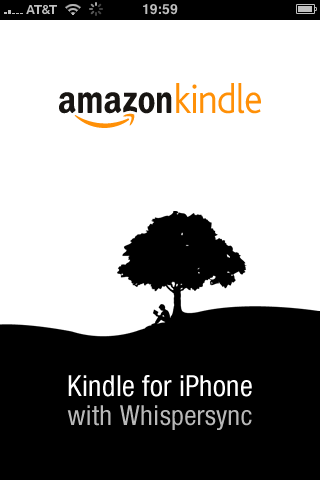 It was with some dubiousness that I downloaded the Kindle application. I already have 8 pages of apps, and I really only use a handful at any given moment. The application runs without a hitch, but I didn’t have any books.

I scooted over to Amazon, to my account, and I purchased the excellent book, Tales from Q School: Inside Golf’s Fifth Major by John Feinstein. I bought it with a gift certificate (another story), and then nothing. I shrugged, and went about my business.

Later, I fired up the application, and lo and behold, the book was 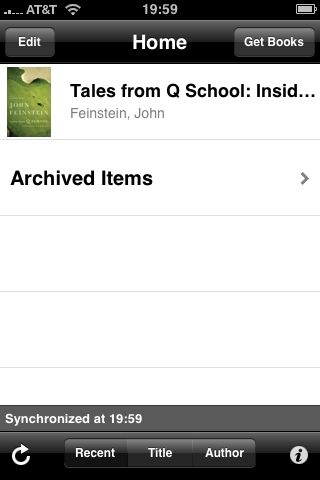 on the list! Tapping on it, a very readable rendering of the book came up.

The font is resizable, and the application takes it in stride. I have used other reader software, and this can be a complicated process.

Turning the page is merely sweeping the page to the right. I read half the book with no eye fatigue. It is fantastically easy to read on the Kindle App. This is remarkable.

My prior experience with ebooks has been the awkward transfer of ebook files -the downloading and the purchasing is always a drag. The ebook stores that I have perused have a limited number of books that I actually want to read. This is substantially not the case with the Kindle app. 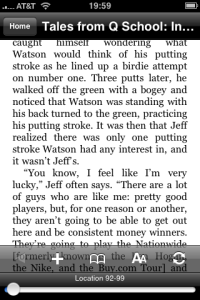 The NY Times bestseller list, the deep catalog of recent books on Amazon, this is the scale that Amazon brings.

Whisper Sync is the killer app of the whole deal. I bought the ebook online, and it shows up basically instantly on my index of books. This is not only cool, but going to make Kindle the leader in all of this.

This leaves Sony out in the cold again. They just don’t get the modern economy and haven’t evolved past the cassette walkman in terms of business models.

The drawbacks are due to the screen technology. The Kindle draws power when a page is turned. The e-ink maintains its image without drawing further current. Reading a book on iPhone results in a significant battery drain -about half the battery for half the book or two hours of reading which is on par with video watching or gameplay.

And finally, the application does exactly what its suppose to which is convinces me to go and get a Kindle 2!