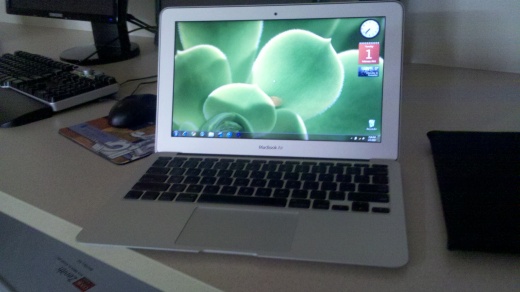 This grainy photo above shows my shiny new Macbook Air running (GASP) Windows 7. While this feature has been available via a utility called Boot Camp, I had always run Windows XP in virtualization, first in Parallels, and currently in the open-source (free) Virtualbox. That said, I wanted a faster option, particularly to see if this set up would run 3D CT analysis software well. My current home workstation, a Dell desktop replacement laptop, slows to a crawl when I run this software, but something told me it may run better with the flashdrive enabled Macbook Air.

Buying a shrinkwrap Windows 7 was not fun -an initial trip to Best (not) Buy revealed that they were happy to sell you an empty box, but after they took your money realized the whole store was empty of actual Windows 7 disks. I therefore went to Amazon and was happy to find Windows 7 Ultimate for 40 dollars off the Microsoft price. It arrived two days later and away I went…

To the Apple Store to buy a Superdrive. I tried various ways of creating a bootable USB flash disk, but after several hours, decided to take the plunge and purchase the MacBook Air Superdrive. The Boot Camp setup was a little annoying -you had to download Boot Camp drivers and burn a CD to load onto your Windows drive. You then had to partition the hard drive -I initially set aside 25 Gb but now find that I am running out of space as I load up with necesary software.

After a few days of fiddling, and running it in Windows, I have to say I am surprisingly pleased. Windows 7 is as beautiful as Windows XP is mofugly. It anticipates your needs and just works -for example, drivers for my network printer were automatically downloaded upon adding it to the printer list. This sort of ease of use used to be associated with Mac OS only, but Microsoft has finally bit the bullet and realized that the “for business” label was just an excuse for keeping things arcane and difficult. Getting XP to recognize a network printer is a Sisyphusian task. Windows 7 does it with elan.

Strangely enough, I am enjoying working on Windows 7. Sure -the fonts aren’t as good looking, but the OS is polished and refined. Frankly, I love it. The 3D CT software runs as well from my home as it does in the office on its server (a Dell Xeon PC which is monstrously huge). I am loading Office on it. During the late ’00’s, Microsoft seems to have gotten the message that their software was preferred by geeks, but generally despised by an increasing number of people. What always kept be away from Windows 7 was the terrible hardware available -I had miserable experience with Sony and Dell, and am dubious of any of the large PC makers. Boot Camp and Macbook Air changes all that.

Oh, the virus thing -Microsoft now offers a free download called Microsoft Security Essentials which does a decent job of policing the computer. Kudos to Microsoft and here’s to hoping much luck and fortune to that other iconic American company.