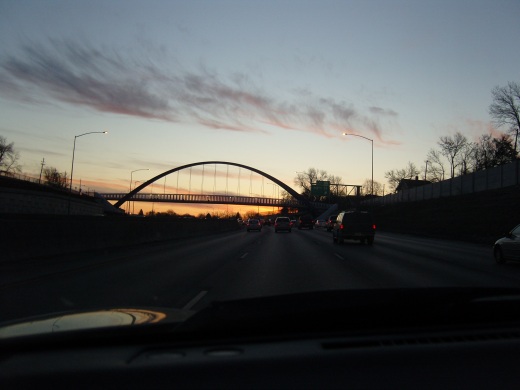 It’s 14 miles from my house to my place of work. I do this by car every dy, usually at day break. What I notice is not the number of cars on the road with me, but the fact that in each car, large and small, sits usually one driver.

In a world of abundant energy, this makes sense -who wants to walk to a subway station or wait in the rain for a bus? Our city planning is centered around the car, with multilane highways and huge parking lots which render walking a frazzling venture for only the very young or very poor. No car, no job. 14 miles is about 3-4 hours by walking, 2-3 hours by horse, an hour by bike, but a perfectly reasonable 20 minutes by car. It allows us to live in “the country” with large lots and trees, away from the city which is surprisingly empty of people before and after work hours. Very few people walk on the sidewalks of downtown.

Last year, when gas went over 4 dollars a gallon, this meant 8 dollars a day to go to and from work. For people who live an hour out, usually because these homes cost less, this translated into 20 dollars a day (assuming a slightly more fuel efficient car), or a hundred dollars a week, or 400 dollars a month. Because of the economics of our car based lifestyle, the majority of people who make 40,000 or less live further out to share in the benefits of the American dream -a lawn, a 3-4000 square foot house. This 400 dollars a month or 4800 dollars after taxes easily translates into 10-20% of income.

It was unsustainable for many, and the downturn in the economy, with slip in demand, brought a welcome reprieve to most who have managed to keep their jobs. The problem is that we have this moment to try to fix some of this, and likely we won’t. With the prices down, it makes sense to move closer to one’s place of work or move that work closer to the home. Walking distance is best. The problem is the suburbs and exurbs are not designed for bipedal commuting. Grocery stores are miles away, minutes by car but up to an hour by walking.

When the economy revives, demand will spike, and gas prices will go back to where they were last summer. This is a sure thing. What to do?

The sensible thing would be to increase the gas tax, ratchet it up slightly to make it hurt less. This was something proposed by President Carter a generation ago, so that we could bank during times of plenty, to develop energy alternatives because America’s oil reserves had gone “past peak.”

What is peak oil? In any oil field, there is a finite amount of oil. In any country’s sovereign territory, there are only so much oil accessible with available technology. As the oil runs out of a field, it takes more money to extract this oil. As known oil fields are tapped out, money needs to be expended exploring and developing newer fields. Investments must be made in extraction technologies. The oil wrung out of the fields may cost more than simply importing it -this is what the US faced in the seventies. We had gone past peak and every subsequent year, less oil was available domestically, and more had to be brought in from abroad.

This has had many consequences. For a while, North Sea fields belonging to the UK and Scandinavian countries kept prices down and we had the flush years of the 80’s and 90’s -exactly the times when we should have been banking this wealth for future times of need. Carter saw this, being an engineer, and understood it. But America became besotted with cheap oil which allowed for cheap food and cheap stuff -all byproducts of petroleum (ref Omnivore’s Dilemma, Michael Pollan). It was made blind by 2, 4, and 6 year election cycles, when 10-100 year vision was needed.

It is a closely held secret -the estimated reserves of the Saudi oil kingdom, but many experts believe that it has passed its peak. The hidden gift of this recession is cheap gas, but it is also a curse, because the impetus and economic incentive to purse energy alternatives while promoting conservation are gone when gas prices drop due to low demand. Think about this when you sit in traffic, idling that SUV along with everyone else sitting alone in their car.