As we lurch forward into the new era, I am comforted by the dissipation of the overly hopeful buzz that I had from about election day to about yesterday. It was infatuation -the same thing that makes Valentine’s Day a commercial juggernaut. We were a nation of giddy school girls infatuated with the hot new Social Studies teacher, until we realized that he gave a lot of pop quizzes, and he’s really, really mean (stomp – twirl).

The NYT’s (link) writes about a gang of moderates hijacking the stimulus legislation from the left and the right, and this does give me hope. This centrist bloc is where we should all be as a nation as we detox from a two decade binge of mainlining easy credit while enriching the dealers of said credit. And this is it -we should be detoxing to some degree by abstinence and not by replacing easy money with public money. If cold turkey hurts too much, then a limited run of nicotine patches for the addicted nation until sobriety and clean living within means return to the norm. 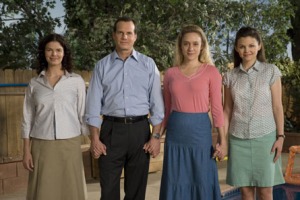 It's hard out there for a pimp

So where do I turn in these troubling times for examples of clean living? The TV of course, in  the form of the Fundamentalist Church of Latter Day Saints. I checked out HBO’s Big Love to see what all the buzz was about. It’s an amazing show, and not for the reasons that you would expect. I know, I know, Chloe Sevigny is one of the most important actresses of our generation, and she gives a mesmerizing, hypnotic performance as the-one-I-wouldn’t-mind-being-plural-married-to.

The show’s popularity speaks to a desire to be a part of a larger connectedness that we lost when we chose to accept live as a nuclear family unit, that we move to dislocated exurbs in Charlotte, Atlanta, Nashville, Houston, Minneapolis, Las Vegas, and Peoria -moved about like pawns on a chess board. In these troubled times, the sight of three homes circled like wagons around a common backyard with your own tribe, your own peeps, having dinner at a long table is a splash of cold water in the face. The show focuses on the people and does not dwell on their lifestyle too much, but that’s not unexpected for a great show. The plural marriage thing serves to triple the emphasis on the man-woman interplay, and correctly shows that with three wives, a man can suffer 9 times more than if he only lived alone with a high speed internet connection and a microwave. I rather enjoy this thought – if you support gay marriage, then you have no right to oppose plural marriage. So maybe that’s what I’ll give my wife for Valentine’s day -permission for her to go look for a second wife, for the both of us.

One thought on “The Optimist”