The Cog by G

The Kobayashi Maru is a geek reference from Star Trek. At Star Fleet academy, cadets destined for command are given a no-win scenario which is used to assess their character and quality. As the Star Trek canon goes, you, the commander of a starship, get a distress signal from the Kobayashi Maru, a freighter, which has hit a gravitic mine. The ship is in distress within the Neutral Zone, a kind of 23rd century DMZ, and entering it would be construed by the Klingons as an act of war. It’s a setup -if you attempt rescue, you are immediately set upon by a fleet of Klingon ships.

Kirk is famous for declaring “there is no no-win situation” and is famous for having “won” the Kobayashi Maru simulation while at Star Fleet Academy by reprogramming the computer-based Klingons to have fear of “The Captain Kirk.” He cheated, but was commended for original thinking.

It is a truism that in the end you die. In that respect, life is a very long Kobayashi Maru scenario, a no-win situation where the end is known. You can’t escape, you can’t win. But that isn’t the point of Kobayashi Maru. It is how you conduct yourself as the ship goes down -are you helping people onto the lifeboats or are you elbowing people out of the way to get on one? 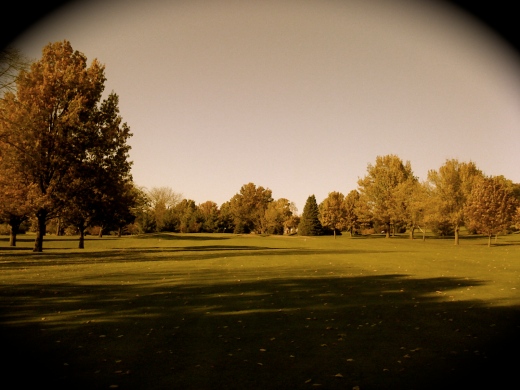 Went to Hype for probably the last time in 2008. Am probably going to shut down for the season. Am planning on regular visits to the golf hut out at Wakonda. The course was relatively empty, and had a very pleasurable round on a windy but sunny day with my dad, DH, and Mr. RJ. Hype was truly a gem today, and I finally understood the thinking behind her design. Firstly, she was never meant to be played with a titanium driver. From the middle-aged-guy-who-is-sensitive-about-shrinking-length tees (Green), I was zapping the ball today to pitching and sand wedge length. The course would be a wicked test with hickory shafts. The members here understand that and actually have a classic equipment tournament where you have to play with niblicks and mashies. The greens which I originally thought were a bit one dimensional (all featuring that built on a slope, look at the horizon! fakeout illusion featured on Wakonda #4) displayed their teeth. The greens matched up very well today. The fall colors framed a very pleasant day.