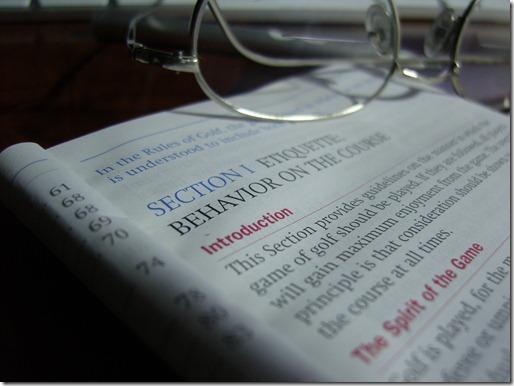 When my son turned 8, we enrolled him in an etiquette course at our country club. He was one of only two boys in that class, which had four times as many girls. Etiquette is as popular among boys, it seems, as ballet or gymnastics. So how is it that we teach our children, especially our boys, manners? In my experience in the Midwestern suburbs, for the presumptive future alpha males, it is through football that parents teach their boys how to behave in society.

The cult of football, which recently took a hit in the Penn State scandal, is very much the secular religion in the US, and its principles of individual sacrifice, self improvement, and group effort are laudable. The American ideals are poured into the public ethos of football. Much of America’s recent history can be viewed in a football context, explained in football metaphor, and historical events remembered like games and seasons. If you are a space alien needing education in American culture, you need only to review the past five Super Bowls’ worth of half-time shows and commercials. Football is America’s vernacular.

In watching an etiquette class, I realized that the forms and routines –how a table is laid out, how you approach the chair, which side the drinks are, which side is the meal served, what the utensils are for, etc., create the physical input to dial in behavior and ultimately etiquette. Dressing and behaving like a gentleman makes you a gentle man. Let me explain. The mind can be changed based on what you do physically. It has been shown that simply smiling increases the dopamine levels and changes your brain patterns to one that matches happiness. Yes. Smiling can make you happy.

The mind can be changed based on what you do physically… Smiling can make you happy.

Martial arts like Tae Kwon Do or Kung Fu focus a lot on forms –series of rote maneuvers that are memorized which to me as a student seemed tedious but retrospect have the effect of shaping the mind. Focusing on the forms of courtesy eventually makes you courteous. So where does football and football parenting leave us?

As far as I can tell, it teaches impressionable young boys how to dominate the weak. It confuses narcissism as self-esteem. By its nature, football cannot teach empathy, courtesy, or thoughtfulness. There is nothing wrong with this if your goals for a society are to create a core group of warrior that will fight wars, conquer nations, and pull down an eight figure salary in free agency. The unintended side effect is that you readily miss the opportunity to prevent the development of psychopathic bullies and date rapists. You only have to watch parents at football practice to understand why this is so. It is why figures like Tim Tebow are such an anomaly not only because he seems to outwardly practice courtesy, respect, and reverence. It is why Penn State was allowed to happen, because football is more important that a few little boys.

If you want to teach your child how to compete while being civilized, you can try etiquette lessons, but more practically, you can do no better than golf. The first section of the USGA Rules of Golf is focused on etiquette, but in fact, you teach your child important lessons by having them accompany you for a round on the cart. You learn to wait your turn staying respectfully silent. You learn to be timely and considerate of others in your group and in the groups ahead and behind you. You learn to be honest and to be your own referee. You learn to impose penalties on yourself for transgressions and be transparent about it. You learn to post your scores (like submitting tax returns when running for president). You learn to behave in a way that would make you proud and not ashamed.

As a nation, we need more mediocre golfers than we do washed out football players. We will be far better off for it.

The HAC, our neighborhood tournament, is coming up and to insure complete transparency in the handicap process, I again offer up my card. I have been struggling while I fix my short game using the books by Stan Utley available on Amazon. Occasionally, I will hit a pitch that defies all reason but it could be really really good or really really bad. I carry a 20 course handicap at Wakonda. The anomalous 76 taken under shamble/scramble/individual conditions was posted after some deliberation, again for the sake of transparency.