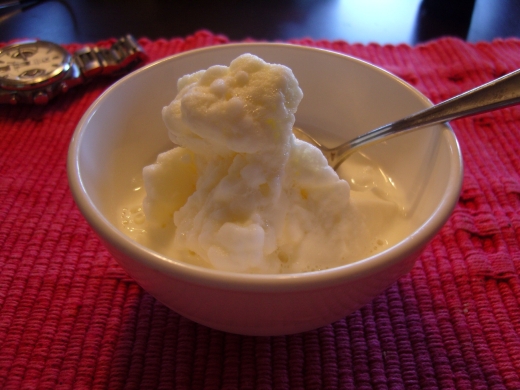 Ice cream has always been an mystery and it was solved by my cub scout G who learned it during a recent mosquito infested camp. It’s simplicity is as wonderful as the the ice cream which is perfect. Made with whole milk, it is basically a vanilla gelato, tasting less fatty but just as good as the thick buttery premium ice creams. That it’s homemade adds flavor notes that can only be summed by by G -“It has a better taste than processed because it’s made by a human.”

Into the larger Zip-Loc or plastic sack, you place lots of ice, a cup of salt, and a cup of water. You put the small bag of milk inside and you shake the bag holding up sides of the bag. After ten minutes -voila -the best ice cream you’ve ever had!

Everything I’ve tried this summer in terms of cooking which has been mysterious to me is in fact amazingly simple. This lets you make just enough ice cream for about 3 people, a perfect dessert.