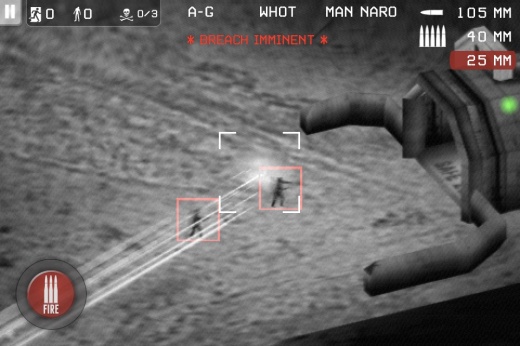 Zombies are definitely putting their stamp on the zeitgeist. Until recently, vampires were all the rage, but they were never my cup of tea. While vampires are about forbidden seduction -think Don Draper and your mom (didn’t know he was a vampire, did you?). The thing that people don’t get about Zombie movies and fiction is that the Zombies aren’t really the center of the action. This was illustrated in one of the finest Zombie movies to date, The Road (didn’t know it was a Zombie movie, did you?). Zombies are the Gom Jabbar of a Humanity Test (didn’t think I’d reference Dune, did you?). Like a round of golf, a person’s response to a Zombie apocalypse is all about character.

Zombie Gunship is an iOS game that puts you in an orbiting AC130 airplane equipped with mini guns, and two different kinds of cannons. In it, you are the gunnery captain whose task is to obliterate zombies marching on the entrance to a bunker complex. It’s night time, and the battle field is lit up in infrared. Uninfected humans light up the screen bright white, while the walking dead Zombies are a cold black heat sink on IR HUD. Your job is to kill the zombies, keep them from breaching the bunker entrance, but allow the humans through.
The Zombies, when not attacking the bunker, munch on the humans. The problem is that you are allowed to kill only 3 humans inadvertently before it game over -the commander orders you out of the airspace. It’s a simple game with no other characters or maps (a common complaint in the reviews) to mess things up. You gain credits for zombie kills and for each human who make it into the bunker, and you use these to upgrade the weaponry. You can also buy credits through the game (slick) so you can max out the specs on your three gun types (don’t ask me how much I’ve spent).
On an iPhone, the game is a portable addiction like a bag of jelly bellies. On the iPad, it’s engrossing and all consuming, like a really big bag of jelly bellies, and it is the way to play this game. The hook is this. You score better when you ignore the humans and just kill zombies, but then you see the poor blokes getting attacked by the zombies, albeit in tiny ant-sized distance on the infrared. You then are compelled to rescue them with a well gauged barrage from the mini gun, or a carefully distanced blast from the 40mm auto cannon. If you successfully kill the zombie and free the human, you get some points, and praise from the commander. You feel good about yourself in fact. In fact, you end up caring for the poor people running in the night for the shelter of the bunker and may get sidetracked into playing hero. Unfortunately, in this game, and as in all good Zombie movies, playing empathetic hero is not the best way to win at this game. The most efficient at clearing the approaches of zombies without killing yet not rescuing humans do best. There is no punishment for letting Zombie nature take its course.
A recent NYT article (http://www.nytimes.com/2011/08/07/books/review/the-state-of-zombie-literature-an-autopsy.html) pontificated about the Zombie phenomena, tying its popularity to the uncertainties of our times. I would add that Zombies have been with us before Romero created them as the basic fear of being consumed by anything that is not us -whether it is a great white shark, a Tyrannosaur, or an illegal immigrant.
Despite the fearsome images and terrifying drama of good Zombie films and literature, I find them a compelling and a great way to unwind and relax. A Zombie apocalypse, it turns out, does not necessarily favor the strongest or best armed. Rather, aside from a bit of luck, you need your wits. A Zombie armageddon is fair and meritocratic. A level playing field. And who doesn’t like that?