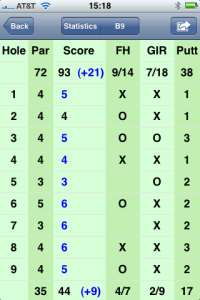 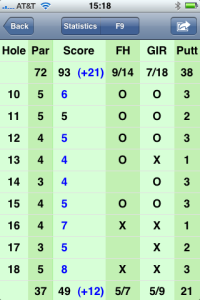 The View Ti Golf’s strength is as much in its scorekeeping functionality as in the yardage by GPS. The round I played today at The Legacy in Norwalk, IA, was an evolutionary step. First -the front nine was a better round on several measures – there was only two three putts, and I putted 17 times -under the 18 putt goal. The back nine was another story. The last three holes were played in 8 over par. This is in distinction to the first six holes played in 5 over par. Overall, I was striking the ball purely and was in fact made seven of 18 GIR’s which is pretty good. I had three or four up and downs -these aren’t tracked explicitly in View Ti, but hinted at by the one putts. The things I have to work on can be summarized by the stats screen to the right:

I drove pretty well -in fact, I missed four fairways into the first cut of rough, and had one out of bounds. I played the par fours at bogey but suffered on the par 3 and par 5’s.

But again, to accentuate the positive -I took an average of 2.1 putts/green which is better than 2.7 putts per green which was my season average based on the cards that I kept. I kept a positive attitude through the round and for the first time in a long time, could see the line. The line was not the problem today -it was the strength with which I hit the putts -I missed two birdies by overrrunning the hole.

It was a great round played in bad weather -for most of the round, we had steady light rain and cool winds which kept the balls on the green  -I stopped a hybrid 4 at 176 yards dead on the green thats how soft it was. My playing partner, DH, who also toughed it out, agreed that it was a fine day for golf.

I mean, would you miss church because it was raining a little?