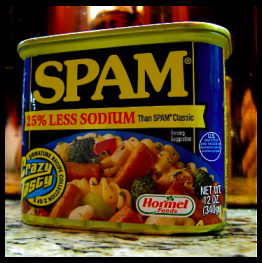 Shown is a can of SPAM, which took a big hit during the nineties after junk e-mail (about p3n1s 3nlarg3m3nt, p0rn, and millions of dollars stuck in an account in Nigeria) was named after it. Fact is, for Koreans of a certain age, it meant not just sustenance, but luxury. During the Korean War, when hunger struck the fleeing and bombed out Korean population, SPAM in the form of government issue C-rations, was a treasure more dear than chocolate. I remember that it was very expensive, much more so per pound than fresh meat, and to give a case of it was the kind of thing you gave at weddings of very important relatives. That or the cans of pineapple rings, but I digress.

I suspect it had to do with the fact that it goes so well with cold rice. Sliced thin and fried in its own juices (and fat) on a grill to a crispiness on both sides, a slice of SPAM gives instant flavor to a bowl of leftover cold rice in ways that cannot be described. It is comfort food that is existential, bringing rush of memories of childhood when as a child of privilege in Korea, I was fed not only the finest fruits and vegetables, but meat, and the best meat in the form of SPAM.

I googled its shelf life, and most reports come back that as long as it has kept its vacuum, its probably still good to eat (link). Meaning as long as you keep it in a cool dry place, you can keep it for years, possibly decades.