I reintroduced golf into my life on the municipal courses of Rochester, Minnesota. During the two months of summer bracketing each side the research year of my fellowship, I took every occasion to go out an hit a bucket of balls well into the night -the sun sets very late if hardly at all during the summers, just like in Iceland and Alaska. The courses were affordable, and well kept. The triplet of Rochester’s muni’s – Northern Hills, Soldier’s Field, and Eastwood  -reawakened my golfly passions.

When we moved back to New York, it was much harder to golf, but I soon found the jewel of muni’s -Van Cortlandt Golf Course. Situated in the Bronx, it is the oldest municipal golf course in the nation. I also found out that during the summers, when the sun rose before the first tee times of 6am, I could call ahead and ask if I could shoot out even a bit before daybreak. I would tee it up in the dark, during the twilight before dawn when everything was murky shades of purple and black. I discovered that the flinty sand of the Bronx, the residua of glaciers from the past Ice Age, would spark when struck with a titanium driver.

When I moved to Des Moines, I sought out the muni’s, and I found some gems. Sugar Creek in Waukee is only minutes from my home, and I still head out there at the crack of dawn in the summers to hit a bucket of balls before clinic. Despite being only 9 holes, I believe it is critical that layouts like Sugar Creek see many more years of play because it is accessible and affordable. On most days, you see retirees, teens, and families going around a track that offers plenty of challenge without being overwhelming. The grounds crew keeps the place in great shape. The other muni I enjoy going to is Waveland. I consider it Wakonda’s sister course in that it shares many features common to courses designed in American golf’s dawn era. Despite being created with hickory shafts in mind, it offers a challenge to golfers with modern equipment. The greens, when mowed, offer up a stern test -I once hit every green on the front nine in regulation there, but managed to three putt all for a 45-DH can attest to this. Today, as my parents drove back to Florida after recovering from their respective operations from earlier this year, I took the opportunity to hit a large bucket of range balls at Sugar Creek. The weather was unseasonably warm and into the low 70’s -just like July in Minnesota, and the arcing trace of the range balls gave me solace. The wind blew hard into my face, but the setting sun warmed it, and I was at peace. 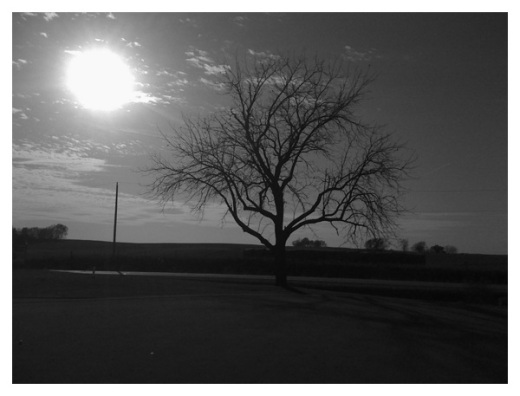 Tree and Farm across 6th Street