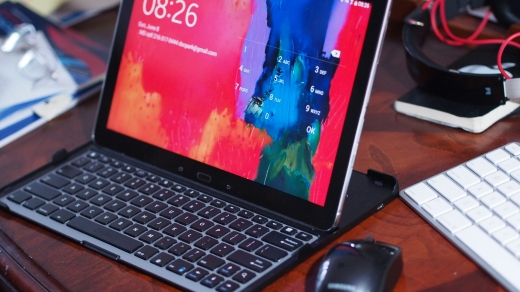 Pictured above is the Samsung Galaxy Tab Pro 12.2 in the 32gB flavor. It is swagged out with a Zagg keyboard case and a Samsung bluetooth mouse. The new Pro series of Galaxy tablets come with Retina level displays and this one just pops colors and details. What really wins me over is the speed which when you run single windowed apps, runs very well on the quad core chip this comes with. Several on line reviews snipe about lag when you run four windows simultaneously -this is a Samsung TapWhiz junky trick that is best avoided. With a keyboard and mouse, it turns the 12 inch tablet into a laptop replacement. Easily going over ten hours of battery time, you don’t have to worry about extra power when you travel internationally or go to work with no cable in your bag. It is pricey and won’t win over bargain hunters -the Google Nexus 7 fills this category, and I think that Google hasn’t released a Nexus 10 II or a Nexus 12, because it wants its clients to have a chance in this world. It kills iPad Air in the screen category -the 10 inch screen on the iPad seems listless and dull in comparison, and I am a certified Apple fan having read the Steve Jobs tome and bought every generation of iPad, including two when the first one came out. I fight daily with my 5 year old who is transfixed by the huge TV like screen. Plus, when I try to work on an iPad, I dream of having a mouse. In Android, when you pair a bluetooth mouse, you get a screen cursor. iOS 8 really really needs to support this. Where Android wins for me right now is it has an edge of future now that Apple is losing as it caters to the extremely young and extremely old and the bulge in the middle. Android, because of its near app parity, means for the most part I don’t have to be tethered to the Apple ecosystem. Even iTunes music can be worked around as your library will be sucked up by Google’s music player on your desktop and made available on Android devices and the Chrome browser. Sure, you can’t play your iTunes movie library, but Google is making that less important by offering the same movies, often for cheaper. Also, the Play app is nimble where the Video app on iPad is ponderous and constantly buffering -maybe Google’s pipes are fatter through some payola -who knows. It’s all good. 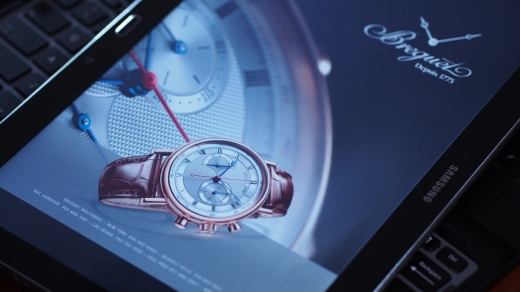 Not like -Best Buy features a Samsung Experience store, where the even cooler penbased Galaxy Pro is displayed but available only by ordering and picking up a few days later. Also, the 64gB version of this tablet was unavailable for immediate pickup and walkout. I get that the iPad’s aren’t available in every flavor, but I don’t understand why every iteration of offered Samsung Tablet isn’t available for immediate pickup and walkout at these store within a stores. Being impatient, I went ahead and purchased with the plan to return if I was disappointed (I am not) and ordering the right tablet from Amazon. Worried -Samsung notoriously ditches its hardware after a year or two, offering maybe one long delayed upgrade in OS or a patch to its Samsung apps here or there (which I just don’t use). I have a bricked Samsung Tablet 2 7.0 in a drawer that won’t power up but I’m afraid of throwing out because of the data in its chips -it died after about three years of steady use. Not Like -while premium pricing implies premium materials, I just see a lot of shiny plastic. Aluminum may bring charges of Apple copying, but they could have gone for a real leather option instead of the plastic leather grain molded back with fake stitching.

The large tablet is a real thing and brings work productivity together with media and fun consumption in a way that Microsoft could only dream of. They so badly want this, but can’t seem to get their act together. My Windows 8.1 tablet from Dell lies unused and powered off because it has a crappy screen and has lost its ability to reset to factory condition which I had to do twice after it got junked up with usual Windows crap -detritus of hacky updater files, streamed media and who knows what rapidly filled up the 32gB SSD and made it unstable and unusable. Despite attractive offerings from ASUS and HP and Dell with super sized tablets -basically detachable 18-21 inch all in ones with 4 hour batteries, I ran away. Microsoft has been revealed for what it has long been apparent to me -an enabler of the “Help Desk” in corporate IT who must have problems arise in computers to exist, and a non-thinking agglomeration of hackers who jumble together whatever works -who uses all the features in Word? While I might use Office for Android when it inevitably limps in in 2015, I will still curse it for stupid things like selecting the whole word instead of part of a word without changing an setting.