I have always wanted to directly access my Outlook schedule on my Macbook Pro, and found nothing that really satisfied except to go into Virtual Box, run Windows and launch Outlook. I purchased Office 2011 for Mac really just for the Outlook, but found to my disappointment, that it supports only Exchange Server 2007 or later. Our corporate server is Exchange Server 2003, and so I’ve had zero luck trying to get it to work. 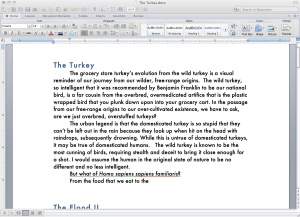 I was on the cusp of returning the package to the Apple store when I launched Word just for the hell of it. Yes, there are some Microsoft related annoyances like the listed user on the splash screen is “Test User” rather than me, and I can’t figure out how to change that, but despite that, I have come to love Word 2011, even more than Pages.

I never really warmed to Pages despite its relatively straightforward and simplified scheme. It does create beautiful PDF documents and I think that that is how I will use Pages.

What I love about this Word is that it is Word, and for some reason, I don’t mind the business at the top -called the Ribbon. It’s remarkably easy to use.

My corporate experience with Word 2003 is not so great, but mostly tolerable, but 2011’s Word is just flat out wonderful. I haven’t even started using the cloud links. Fact is, I hated going to Google apps except to bang out snippets to paste into a later document. Same goes for using Pages on my iPad, which I have decided is not to be used with a keyboard unless absolutely necessary -the Bluetooth never really works and requires frequent re-linking, and even with the plug in keyboard stand (pictured partially under the Office 2011 box above), it never really works well.

First, my Macbook Pro is back. I basically stopped using it over the summer because of iPad, but I realize now that to make stuff,  you still need the power of a laptop. I toyed with the idea of getting a

Macbook Air, but the primary thing that I wanted was just battery life, and I could get it with extra batteries. When the warranty runs out, I plan on swapping the hard drive out for Flash based SSD’s.

The Macbook Pro, despite being 2 years old, is still lightning fast and eminently sufficient for what I need to do. Docked here to a 23 inch monitor, it basically functions as an iMac, but mobile, it is wonderful to sit down in a comfortable chair and compose.

Second, writing well is very important to me and I have always chosen the finest papers and writing instruments when I write manually (and lose a lot of those fine writing instruments, which is why I favor multipacks of Uniball Onyx pens). Word 2011 is like a top of the line IBM Selectric or a Mont Blanc pen. With 2011, you are writing in style. The spell checking, the formatting, the grammar checking all works well and intuitively. For example, I chose the quotation format, and then later changed the font. It asks you subsequently when you make another quotation, if you want to use the modified format, but does so in a way that doesn’t infuriate you like past Microsoft efforts.

Third, compatibility is still an issue. Despite the fact that I find quitting desktop based software for the cloud easy and natural, most people don’t. There will necessarily be a five year time lag before it ever happens and it may never really happen as people don’t want Google or Facebook (cloud apps are next for them) to know everything about you. The funny thing is, the default file format is .docx which is not backwards compatible!

Fourth -there is no Clippy. In fact, there is very little Windows anything. It feels like Mac software, which OpenOffice and StarOffice, the free office suites, do not. Pages feels more like a page layout software than a word processor, while the iPad version’s fixed appearance just drives me crazy -call me shallow but I think the fake wood top margin drives me insane, and I have gravitated to Quickoffice on iPad for exactly that reason. 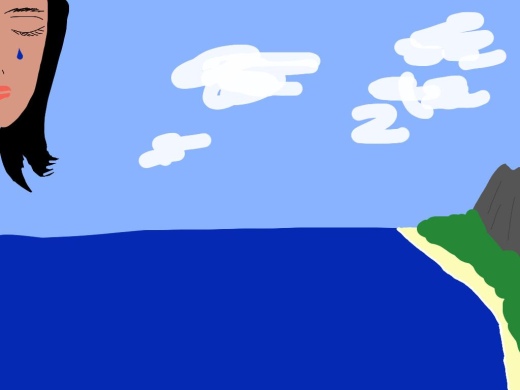 Genesis 9:17 So God said to Noah, “This is the sign of the covenant I have established between me and all life on the earth.”

As the waters rise, as the scientists warn, as Greenland is growing its own lettuce for the first time, the response from many Americans is basically some variation of the above verse from Genesis, where God reassures Noah that, no, I will not fill the world with water and make every living creature live on a Neolithic barge. Again.

The Reverend Timothy Keller, PhD, pastor of Redeemer Presbyterian Church in NY, NY, wrote a wonderful essay on threading the needle between modern science and orthodox Christianity (link to essay http://www.biologos.org/uploads/projects/Keller_white_paper.pdf) where in a style which I learned to appreciate, he spells out the basic problems in a tripartite apologia –his preferred format for preaching to the yuppies. He writes:

Question #1: If God used evolution to create, then we can’t take Genesis 1 literally, and if we can’t do that, why take any other part of the Bible literally?

Question#2: If biological evolution is true—does that mean that we are just animals driven by our genes, and everything about us can be explained by natural selection?

Question #3: If biological evolution is true and there was no historical Adam and Eve how can we know where sin and suffering came from?

Answer: Belief in evolution can be compatible with a belief in an historical fall and a literal Adam and Eve. There are many unanswered questions around this issue and so Christians who believe God used evolution must be open to one another’s views.

The response from the bench is predictable as this dispute between literalists and the interpreters predates Christianity. This dichotomy is likely a manifestation of human speech and all the neurologic wiring that entails. I can imagine this conversation between Erg and !Kerg, two chatty Australopithecines.

Erg: When the great Mother cried her tears and made the seas in ten days and she laid down to become the great Mother mountain yonder, that would mean that she would have had to cry about 1/10th of the volume of the world’s waters in a day… That’s a lot of water. Could this mean that a day in Her time was much longer than a day is now? Could this mean that she was much bigger once and made bigger tears and shrank to become the Mother mountain? Could…

The commentary from the literalists on Dr. Keller’s essay ranges from, “…Professor Keller is trying to square the circle…[scripture quotes]…and therefore the day in Genesis is clearly 24 hours” to “club!” While I concede that many New Yorkers would welcome the opportunity to live in the belly of a whale, most thinking people scratch their heads and think that Hansel and Gretel’s cannibal witch is far more grounded in reality than a cetacean studio.

The fact and reality of science and modernity puts a great deal of pressure on an unchanging orthodoxy. Those most willing and capable of thoughtful change are never in the majority. The Malthusian concept could just as easily apply to this: the educated breed arithmetically while the orthodox breed geometrically.

Time and again, when learning and education flower, the bright lights of the world are drowned out by a flood of fear and ignorance. The execution of the Chinese scholars, the torching of the Alexandrine library, the sacking of Irish monastaries, Galileo, Darwin, and Rushdie –these are the normal patterns. When the creators of South Park have to stop their series mid-season to be censored by the orthodox of several religions in a country that places free speech before all other rights except the right not to have Congress establish a state religion, it confirms that before the great flood, there is an even greater flood of intolerance, narrow-mindedness, and incivility.

May God keep you and bless you, if you so tend to believe.