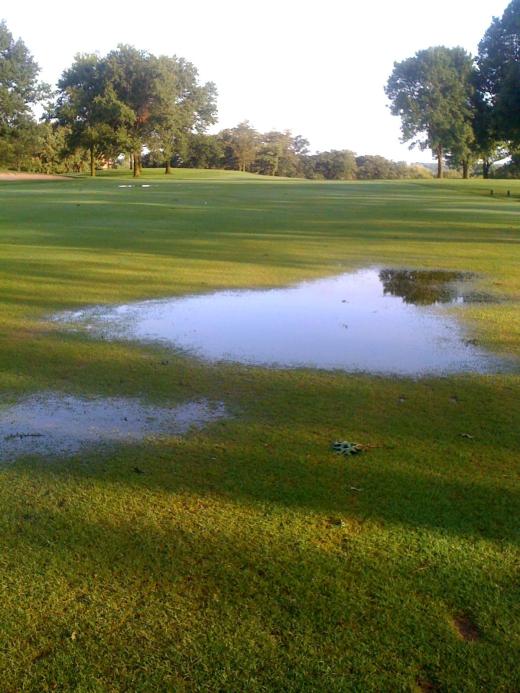 The vexing thing of late has been the torrential rain which occurs almost exlusively at night resulting in us in Iowa waking to flooded roads and basements. Some point to global warning, others to a ten year sunspot cycle. I think it’s life imitating golf -nature gives you the conditions and you play through without complaint.

These collections of casual water remind us how important it is to have balance -too much water, too little water both cause problems. Golf’s rules allow you to move the ball out of casual water, but no closer to the hole. In sand, I believe the rule is you can move the ball to relieve but no closer or take a one stroke penalty and get out of the bunker but no closer which means you can walk it back to your pitch length and get it on the green and move on with life, medicine taken. And know it, the grounds crew will repair the damage.

But can we expect such equanimity in life? We’ve had a bunch of water trouble in Iowa and some areas had turned down Federal insurance because of politics, now only to rue that decision. No one likes a bailout, financial or actual, but I believe civilized society mandates relief from casual water in real life as well. We get relief at Wakonda because of the rules of golf and because of the dues we pay. Our taxes are merely dues that we pay to be members of the society at large.